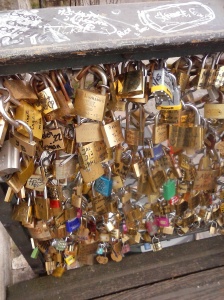 Never throw the key away!

In my recent post “Playing by the Rules and Rueing It,” I mentioned that I got married to stay in Brazil as a legal resident. I was in a committed relationship, but marriage was against my philosophy. And, as it turned out, it was entirely unnecessary. If I had only known how hard it would be to get a contested (non-consensual) divorce…

When my marriage was no longer bearable; when I finally managed to overcome the inertia, gain momentum and break free, I found myself in a legal maze that would have made Kafka laugh.

First, under Brazilian law, I had to say that I left my husband because I was in fear of my life to avoid being charged with “abandoning the home” (abandono do lar) and losing custody of my daughter. Luckily (?) he actually had threatened to kill me – when I told him I’d slap him if he ever belted our daughter again. That remark was the death knell of our marriage. When we sat before the police officer who was taking our statements, he countered that I had threatened him too, as I’d told him that if he ever hit me, I’d pour boiling water in his ear when he was sleeping. All true, though it was mentioned as an anecdote (advice my mother gave me), not uttered as a threat. The female police officer looked knowingly at the female clerk and I realised that he had merely confirmed that I was under threat of physical violence, if not death. First step towards freedom – check.

Then I had to hire a lawyer. I turned to the foster mother of a friend of my adopted daughter and paid her R$1,000 up front (a considerable sum in those days). After a while – was it years? – the process stalled, and eventually the lawyer moved to another state, handing my case over to a colleague, and…nothing happened. I was separated but nowhere near divorced – languishing in marital limbo.

Finally, I came across another lawyer, who told me that my divorce proceedings had probably been “filed in a drawer” at the request of my husband’s uncle/attorney – the unscrupulous jailhouse kind. Fortunately, my new acquaintance knew someone at the notary’s office that had “filed” the proceedings and got them “unfiled.” On both sides, it was all about whom you knew. So far so good – what a relief! Months later, I received word that the divorce had gone through. Free at last…or was I?

One or two years down the line, when I wanted to travel abroad with my daughter, I needed her father’s authorisation, as she was still a minor. We both had to be present, and the official asked us if we had a divorce certificate. A what?? My elder daughter checked into it and found that I would have to go to several notary’s offices – all housed in the same courthouse by that time – to get the right stamps and signatures. Finally, my marriage certificate had a big stamp on the back saying the divorce had been finalised.

Oh by the way, I don’t think my ex ever knew that I managed to push the divorce through. I don’t believe he’ll read this, since he never learned English, but if anyone wants to tell him, feel free…